Wonderful Things!, a British romantic comedy-drama helmed by veteran director/producer Hebert Wilcox, starred singer Frankie Vaughan as, Carmello, a down-on-his-luck fisherman in Gibraltar.  Carmello intends to marry Pepita (played by our girl, Jocelyn, as Jackie Lane), as soon as he can make enough money to make it happen.  He decides to go to England to make his fortune, whereupon he will send for Pepita to join him so that they can get married.  Meanwhile, his fishing partner and brother, Mario (played by Jeremy Spenser) is still in Gibraltar and pining away for Pepita.  Carmello finds that the going can be tough in England, but he is befriended by a pretty blonde (played by Jean Dawnay) whom he had previously met in Gibraltar.  Romance becomes complicated in London and in Gibraltar, but there is a happy ending for all, and Vaughan gets to both show his manliness and warble a few pleasant tunes.

Along with 1957’s Dangerous Youth, Wonderful Things! was a key role in Jocelyn’s early career, as it provided her with significant billing and screen time.  While her role as Pepita was not going to be award material for any actress, I believe that she gave a credible performance and showed enough talent to warrant better than the small roles that she tended to be getting at the time.  Certainly, she was stunningly beautiful and displayed a strong screen presence.  Wonderful Things! is not an all-time classic film, but it is solid entertainment and should be considered a must-see for Jocelyn Lane fans.  It is too bad that it was not shot in Technicolor, rather than in black-and-white, because the scenic Gibraltar location would have benefited greatly.

Filming commenced September 16, 1957 on Wonderful Things!, and it was completed by the end of the year and premiered in London on June 10, 1958 (per IMDB).  I have seen no indication that it was ever released theatrically in the U.S.

Variety reviewed the film in its June 18, 1958 edition based on a private viewing (with an 88 minute running time) at Elstree studios.  The review was generally positive, calling the film a "[p]leasant romantic drama against refreshingly different locale."  It further noted that "Vaughan and Jeremy Spencer are convincing as the brothers sharing the same dark good looks and charm.  They handle the comedy and romantic sequences with plenty of dash."  As for Jocelyn, it noted:  "Jackie Lane, a brunette cutie, is given her best acting chance and responds well considering her lack of experience."

The film had long been difficult to find, and I had almost given up hope of seeing it, but it was released on DVD by the Network label in the UK in 2014. 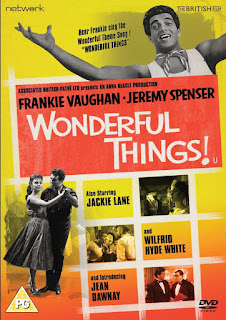 The print is good, with a good picture and good sound.  Extras consist of the theatrical trailer and a slide show of promotional material for the film (mostly still photos).  The running time is approximately 82 minutes.  IMDB lists the running time for the film as 84 minutes, and the Variety review indicated an 88 minute running time.  I have no explanation for the differences.  I recommend that you purchase this DVD to support the Network label in finally making this film available to us.  While it will not play on standard DVD players in the U.S., it will play on region free DVD players and on computers.

Here are a couple of British ads: 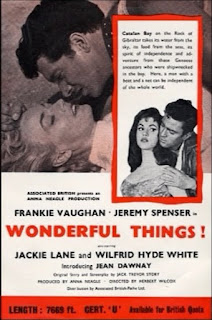 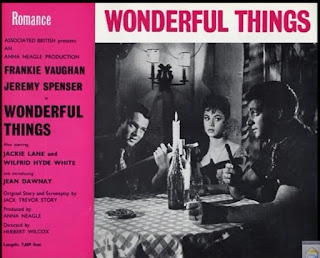 Here are some publicity photos/production stills: 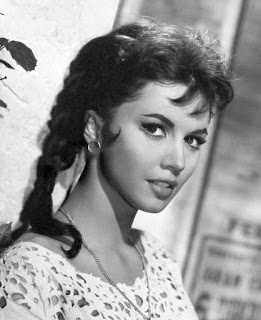 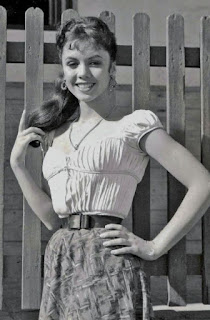 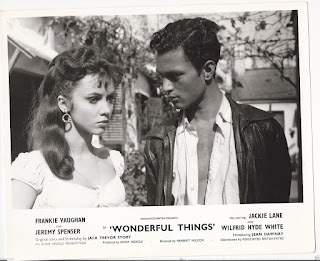 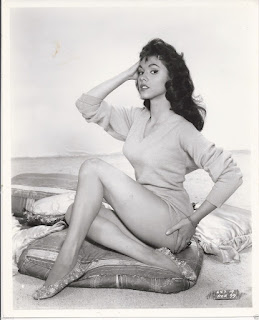 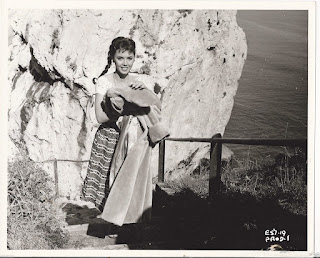 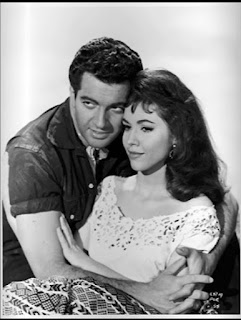 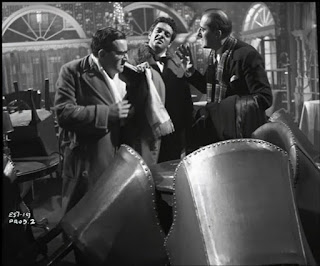 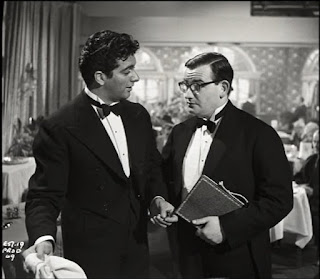 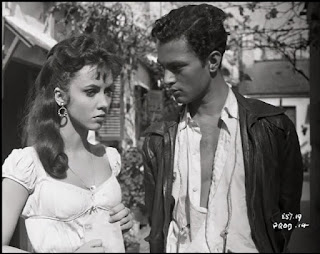 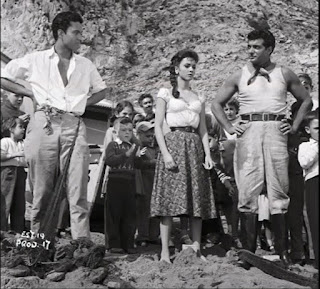 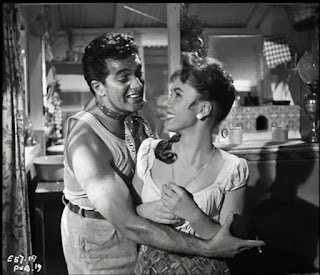 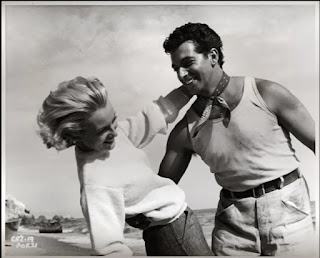 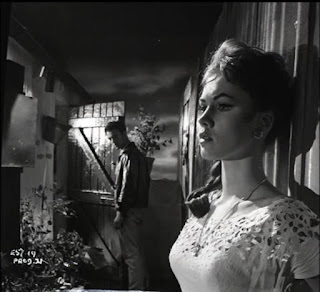 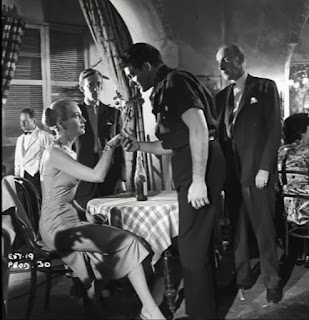 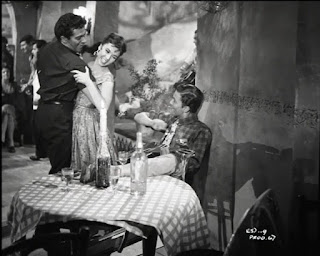 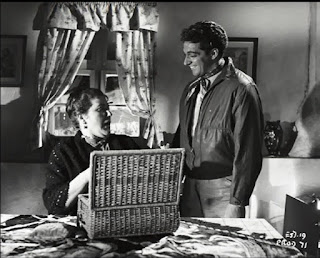 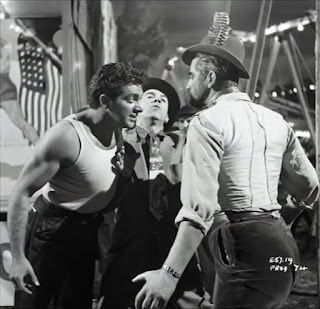 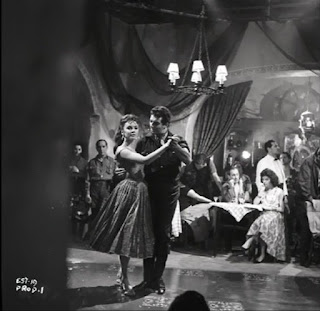 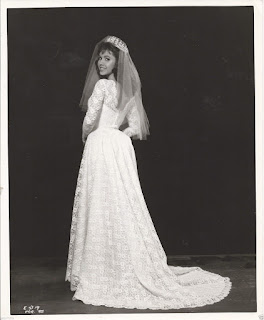 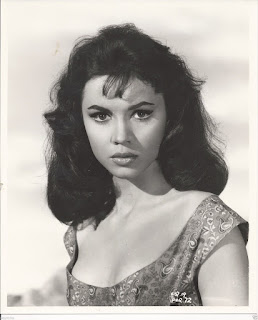 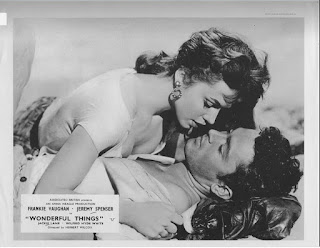 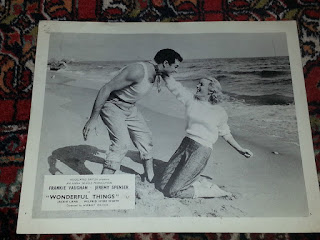 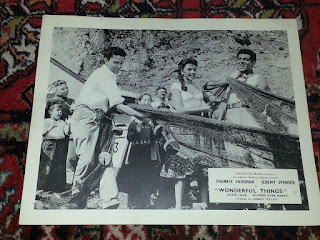 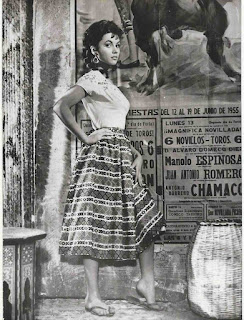 What appears to be a color publicity photo in a magazine: 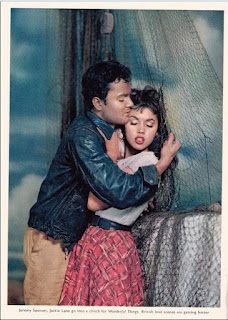