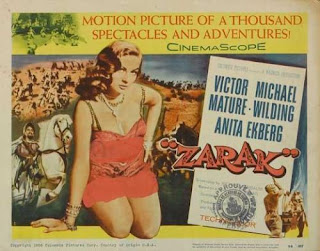 Zarak, a British action-adventure film directed by the accomplished Terrence Young in Technicolor, is the story of Zarak Kahn (Victor Mature), who is going to be flogged to death in his Indian village after being caught in the arms of one of his father’s wives, Salma (Anita Ekberg).  A village mullah begs for his life to be spared, so his father gives in, and one of the village traders begs to purchase Salma, to which the father consents.

After being banished from his home village, Zarak is joined by two of his brothers and leads a band of marauders that rob and terrorize the British colonial rulers of the area (around India or Afghanistan).  He becomes the most wanted man in the country, and eventually is reunited with Salma, who has been surviving as a dancing harem girl.  The remainder of the story involves action, adventure, and battles as the British pursue Zarak, particularly the British commander, Major Ingram (Michael Wilding).  I’ll leave out the ending, so as to avoid a major spoiler.

I’m not going to dwell for long on this film, because its interest for Jocelyn fans is minimal.  Here are a few observations, however:
This movie is not a classic, but it is reasonably entertaining.  I expect it was a very popular Saturday matinee or Saturday TV movie for young fellas back in the day.

As for Jocelyn, her appearance is as an uncredited dancer in the troupe with Ekberg.  She very briefly passes on-screen, and then (at about the 26-minute mark), her face is clearly seen for about 2 seconds.  At least it appears to be Jocelyn to me.  Here is a screen capture of that brief scene: 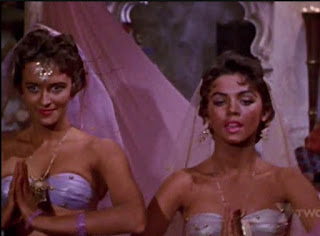 At one time, IMDB listed Zarak on Jocelyn’s filmography, but it has since been removed.   It makes sense that Jocelyn would have appeared in the film, because it was produced by Warwick Film Productions, to whom she was under contract at the time.  In December of 1955, Variety was reporting that Zarak had started shooting in November in Morocco and was shooting after that in London.  Filming was completed in the first week of February 1956.  The initial reports in Variety consistently listed “Jackie Lane” as part of the film’s cast, so it is unclear why she would have only ended up in a blink-and-you’ll-miss-it, uncredited harem dancer part, and it is unclear why IMDB removed the film from her filmography.  The version that I watched was a TV broadcast that ran approximately 91 minutes.  The 2012 Columbia Classics burn-to-order DVD release shows a 96 minute running time, and IMDB shows 99 minutes.  While I have no explanation for the differences, I doubt that the differences involve Jocelyn. 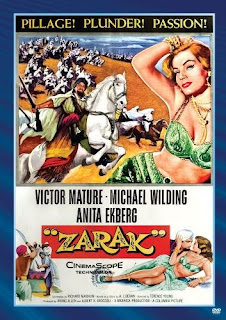 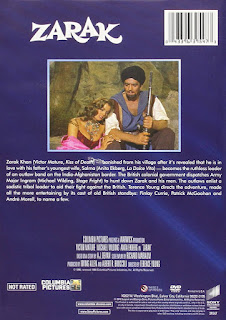 It has also been released in the UK and Europe in a couple of different DVD versions: 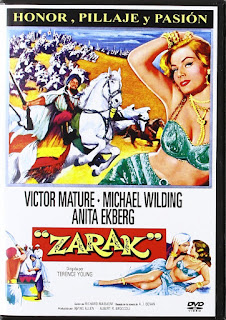 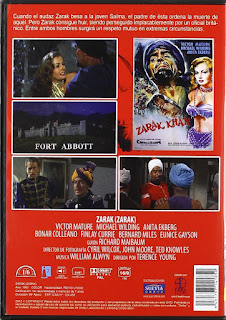 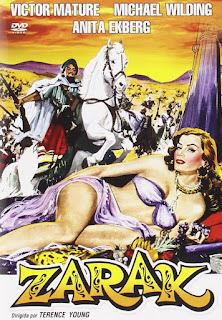 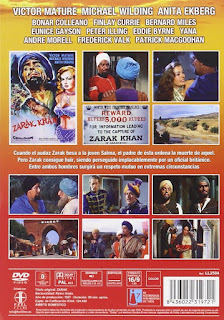 The film premiered in the UK and US in December of 1956, with wider release occurring in January of 1957.  Reports showed good to decent box office results in the U.S., and by October of 1957, Variety was reporting that the film made a healthy profit.

Since Jocelyn's appearance in the film is so fleeting, I am not going to bother with posting a lot of images of promotional material.  Jocelyn is not credited, nor does she appear on any of it.  If I ever run across any still promotional photos that show Jocelyn, then I will add them to this post.

Posted by Jocelyn Lane Fan at 8:05 AM

Email ThisBlogThis!Share to TwitterShare to FacebookShare to Pinterest
Labels: Zarak